View all results (0)
No products found...
Home > The Great Work of the Metal Lover
+ 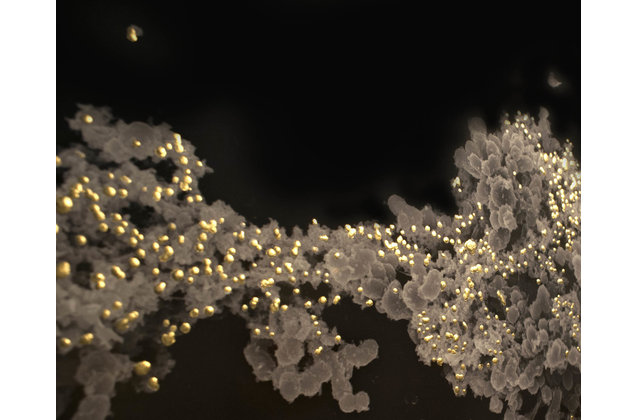 The Great Work of the Metal Lover

The Great Work of the Metal Lover is an artwork by Adam W. Brown that situates itself on the intersection between art, science and alchemy.

Through modern microbiology, a centuries old mystery of gold production is solved; a controlled atmosphere in an alchemic bioreactor has the ability to encourage extremophile bacteria to reproduce. These specific bacteria form the key to the origin of live. They have the unique ability to metabolize toxic materials such as uranium, arsenic and gold chloride. By using a combination of print and paint techniques, the paintings hold 24K gold, fabricated in the bioreactor, on enlarged microscopic images representing the bacteria.

Lakes and oceans contain substantial amounts of dissolved gold which, due to its diluted concentration, becomes virtually unusable. There is astounding evidence that suggest that many of the gold depositions on earth are not only formed through heat, pressure and geo-chemic processes, but that they are also a by-product of micro-organic functioning.