View all results (0)
No products found...
Home > Artists
Sort by:
Sort by product: 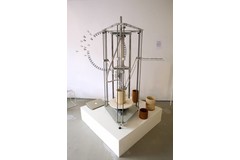 ___Sander Wassink, born in the Netherlands in 1984, graduated from the Bachelor of Man & Living at the Design Academy Eindhoven in 2012. Wassink is a designer who encourages the public to reconsider society’s widely accepted ideas of beauty, aesthetic value and status. Although we live in a consumption-oriented society where new construction and production are the norm, Wassink is more interested in the discarded, the leftover, and researched the possibilities of the already partially formed. Whether his object is the partly demolished facade of an abandoned building, or the everyday garbage from our over productive culture, Wassink envisions the possibilities of what it already is and can be.